Myth: Rubber tires on a car protect you from lightning by insulating you from the ground.
Fact: Most cars are safe from lightning, but it is the metal roof and metal sides that protect you, NOT the rubber tires. Remember, convertibles, motorcycles, bicycles, open-shelled outdoor recreational vehicles and cars with fiberglass shells offer no protection from lightning. When lightning strikes a vehicle, it goes through the metal frame into the ground. Don’t lean on doors during a thunderstorm.

Myth: A lightning victim is electrified. If you touch them, you’ll be electrocuted.
Fact: The human body does not store electricity. It is perfectly safe to touch a lightning victim to give them first aid. This is the most chilling of lightning myths. Imagine if someone died because people were afraid to give CPR!

Myth: If outside in a thunderstorm, you should seek shelter under a tree to stay dry.
Fact: Being underneath a tree is the second leading cause of lightning casualties. Better to get wet than fried!

Myth: If you are in a house, you are 100 percent safe from lightning.
Fact: A house is a safe place to be during a thunderstorm as long as you avoid anything that conducts electricity. This means staying off corded phones, electrical appliances, wires, TV cables, computers, plumbing, metal doors and windows. Windows are hazardous for two reasons: wind generated during a thunderstorm can blow objects into the window, breaking it and causing glass to shatter and second, in older homes, in rare instances, lightning can come in cracks in the sides of windows.

Myth: If thunderstorms threaten while you are outside playing a game, it is okay to finish it before seeking shelter.
Fact: Many lightning casualties occur because people do not seek shelter soon enough. No game is worth death or life-long injuries. Seek proper shelter immediately if you hear thunder. Adults are responsible for the safety of children.

Myth: Structures with metal, or metal on the body (jewelry, cell phones, Mp3 players, watches, etc.), attract lightning.
Fact: Height, pointy shape, and isolation are the dominant factors controlling where a lightning bolt will strike. The presence of metal makes absolutely no difference on where lightning strikes. Mountains are made of stone but get struck by lightning many times a year. When lightning threatens, take proper protective action immediately by seeking a safe shelter - don’t waste time removing metal. While metal does not attract lightning, it does conduct it so stay away from metal fences, railing, bleachers, etc.

Myth: If trapped outside and lightning is about to strike, I should lie flat on the ground.
Fact: Lying flat increases your chance of being affected by potentially deadly ground current. If you are caught outside in a thunderstorm, keep moving toward a safe shelter. 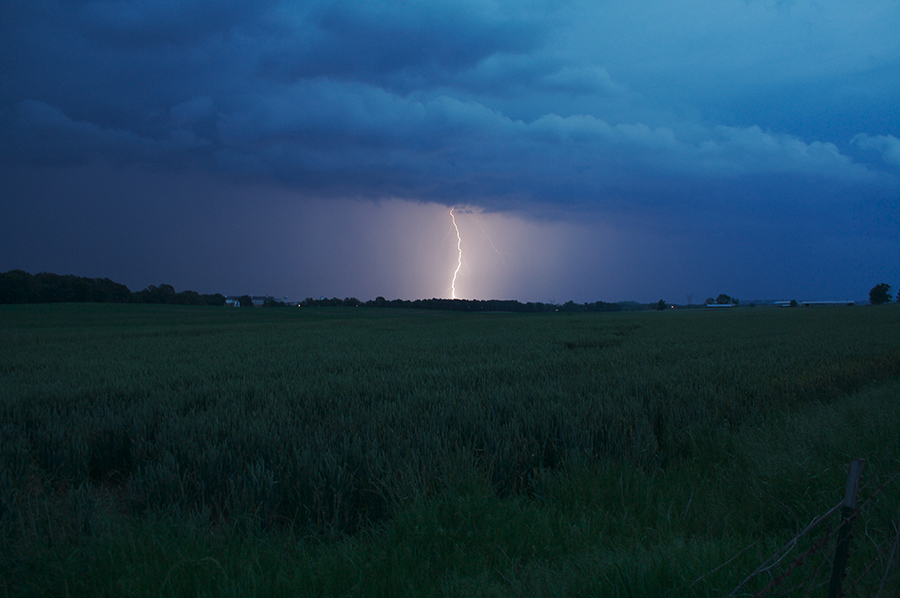 If Lightning Strikes a Person
Call 9-1-1 for medical assistance immediately.
If the person is not responsive and not breathing, BEGIN CPR IMMEDIATELY. Use an Automatic External Defibrillator if available.
Check for other injuries - Check for burns in two places. The injured person has received an electric shock and may be burned both where struck and where the electricity left their body. Being struck by lightning can also cause nervous system damage, broken bones and loss of hearing or eyesight. People struck by lightning carry no electrical charge and cannot shock other people.