Nuclear explosions can cause significant damage and casualties from blast, heat and radiation, but you can keep your family safe by knowing what to do and being prepared if it occurs. 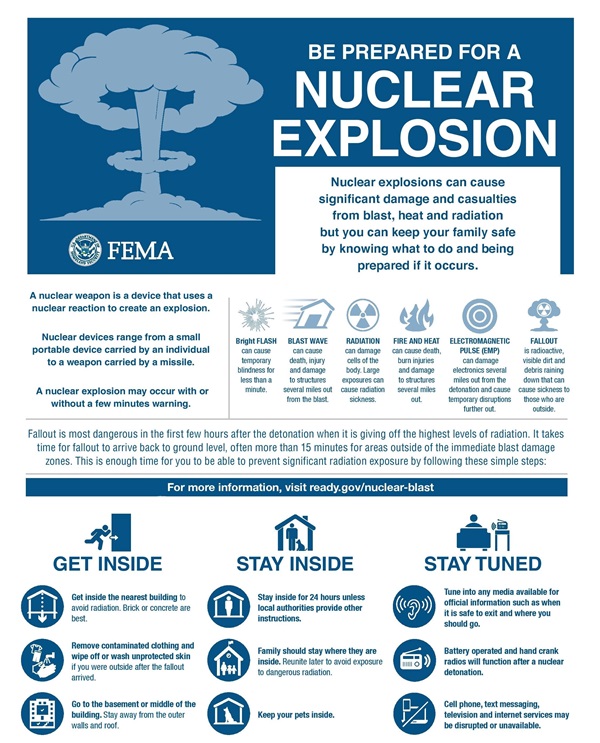 A nuclear weapon is a device that uses a nuclear reaction to create an explosion. Nuclear devices range from a small portable device carried by an individual to a weapon carried by a missile. A nuclear explosion may occur with or without a few minutes warning.

Fallout is most dangerous in the first few hours after the detonation when it is giving off the highest levels of radiation. It takes time for fallout to arrive back to ground level, often more than 15 minutes for areas outside of the immediate blast damage zones. This is enough time for you to be able to prevent significant radiation exposure by following these simple steps:

GET INSIDE: Get inside the nearest building to avoid radiation. Brick or concrete are best. Remove contaminated clothing and wipe off or wash unprotected skin if you were outside after the fallout arrived. Go to the basement or middle of the building. Stay away from the outer walls and roof.

STAY INSIDE: Stay inside for 24 hours unless local authorities provide other instructions. Family should stay where they are inside. Reunite later to avoid exposure to dangerous radiation. Keep your pets inside.

STAY TUNED: Tune into any media available for official information such as when it is safe to exit and where you should go. Battery operated and hand crank radios will function after a nuclear detonation. Cell phone, text messaging, television, and internet services may be disrupted or unavailable.
Take an Active Role in Your Safety