Escambia County and the City of Pensacola are encouraging the media, partner agencies and residents to participate in a 2020 Census Stakeholder and Community Kick-Off event at the Brownsville Community Center, located at 3200 W. De Soto St., on Wednesday, March 18 at 5:30 p.m.

This event is to help ensure everyone in the community is accurately counted during the nation's once-in-a-decade headcount of every person in the United States. Speakers will include Escambia County District 3 Commissioner Lumon May, Pensacola Mayor Grover Robinson and U.S. Census Bureau Partnership Specialist Nisha Barron.

The results of the 2020 Census will help determine how hundreds of billions of dollars in federal funding flow into communities including Escambia County and the City of Pensacola every year for the next decade. That funding shapes many different aspects of every community throughout the U.S., from highway planning and public transit to educational programs and housing assistance.

Census Day 2020 is April 1, but many households should expect to hear from the U.S. Census Bureau in March.

Some important Census dates include:

What is the Census and how do I respond?
The 2020 Census counts every person living in the 50 states, District of Columbia, and five U.S. territories. The count is mandated by the Constitution and conducted by the U.S. Census Bureau, a nonpartisan government agency. The 2020 Census counts the population in all 50 states, the District of Columbia, and five U.S. territories (Puerto Rico, American Samoa, the Commonwealth of the Northern Mariana Islands, Guam, and the U.S. Virgin Islands).

Each home will receive an invitation to respond to a short questionnaire online, by phone or by mail.

To learn more about the 2020 Census, visit 2020census.gov or follow the U.S. Census Bureau on Facebook for updates. 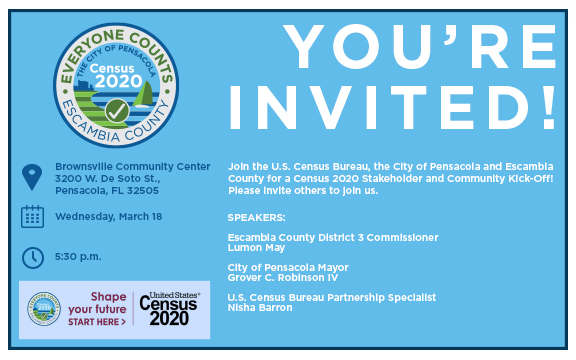 Visit Us on Social Media